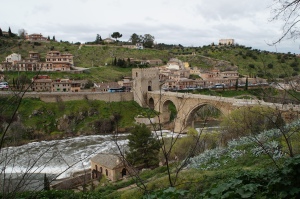 The view from the apartment we stayed at is RIDICULOUS.

These are called “Bombas Toledos” which literally means Toledo bombs. But they are meatballs with mash potatoes deep fried and served with “fake” ranch and ketchup sauce. THEY ARE HEAVEN.

The last part of my Semana Santa vacation was hitting up the city of Toledo which is about 30 minutes outside of Madrid by train.  Fun little story about Toledo:  It use to be the capital of Spain.  Say what?  This little city on top of a hill use to be the capital?  POR QUE?  Well friends, that is exactly it.  Many capitals in Europe back in the day use to be in areas that were elevated, surrounded by a river, near a river, or literally on top of mountains so that the inner city/castle could be protected from invaders (refer to my post about Lisbon and el Castillo de San Jorge…it’s the perfect example).

Anyways, back to history.  Toledo dates all the way back to the Roman Empire.  Once the Empire fell, Toledo became the capital of Visigoth Spain (Germanic tribes).  The city served as the capital until the 8th century when the Moors conquered the city.  Fun fact:  during this time, Toledo was home to Jews, Christians, and Muslims all co-existing peacefully.  This time is called  La Convivencia. Until the early 16th century, Toledo served as the capital of the Castile region, but then the Spanish court moved to the city of Madrid. 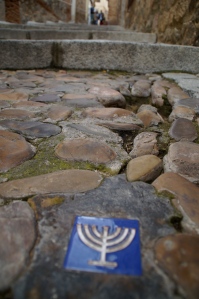 All over the streets of Toledo there are tiles with Muslim symbols, Christian symbols, and Jewish symbols to represent the co-existance of these religions.

Luckily for us Toledo understands what life is like for us Auxiliaries.  So they have a wristband that allows you to visit 6 awesome historical sites.  Here are the highlights of them:

This monastery was founded by the Great King Ferdinand and Queen Isabella in the 15th century.  It was originally built to be the mausoleum for the Monarchs of Spain…Sadly Toledo was once again jipped and the monarchy decided to move the bodies to Granada.  Fun fact:  In the cloister area of the monastery there is this motto written:

Thanks Christine for being a great model!

It says, “Tanto monta” on one and on the other “Monta tanto.”  There are two stories.  The more romantic one is that these two phrases were the marriage vows of the couple, translating to mean “Isabel como Fernando” or Isabel like Fernando.  Which really means “Equals opposites in balance,” that although the two come from different royal backgrounds and areas, they will rule Spain as one monarchy (which is kind of false because the two different areas did not united during their rule).  However, this story is only a fairytale, because this motto was only used by King Fernando.

The other story is that Fernando changed a phrase from Alexander the Great,  Tanto monta cortar como desatar, “It amounts to the same, cutting as untying”, from the story of the Gordian knot where Alexander the Great, wanting to untie the knot of a sacred yoke at Gordion to fulfill the prophecy of the conquest of Asia, decided to cut it with his sword. Fernando’s idea behind this is that Spain had discovered the all the lands that were there to be discovered.  More specifically that there is literally nothing more past the country of Spain, Spain was considered the end of the world….which leads to the next fun fact:

This phrase, “tanto monta, monta tanto,” was also found on the Spanish flags, seals, etc, during the ruling of Fernando and Isabel rule.  It is even said that this motto was on the flags that Christopher Columbus brought to the New World…but then once they discovered that there were more lands than they thought they changed it to: “Plus Ultra,” which means “further beyond,” since now they have lands in America. 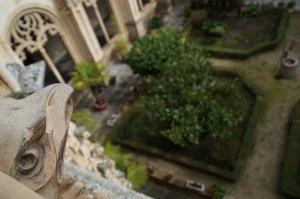 The courtyard of the Monastery.

Inside the Church of the monastery the “paseos,” or the religious floats were out for the processions that happen each day during Semana Santa.

Our next stop was the Santa María la Blanca (Saint Mary the White).  This is another example of how people in Toledo co-existed with the 3 different religions.  This building use to be the The Congregational Synagogue of Toledo, but now is a museum . It was built in 1180, it is considered the oldest synagogue building in Europe still standing. Ironically now, It is now owned and preserved by the Catholic Church.

Our next stop was the Church of Jesuits…I couldn’t find any really exciting info about this church.  However, it offers some of the greatest views of the city from the two spiral towers.

Inside this church was the biggest cabinet for bones of saints!

In the back in the Alcazar. It isn’t pictured, but the Cathedral of Toledo would be on the right of the picture.

Our next stop was the Iglesia del Salvador, which was first a mosque and then converted into a church. 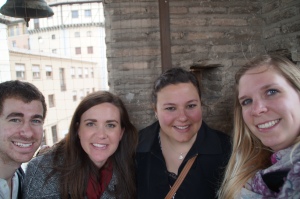 The group hanging out at the bell tower of the Iglesia del Salvador.

One of my favorite sites we vistited was el museo de Greco, El Greco museum.  El Greco is a famous painter from Greece (hence why his is called the Greek in Spanish).  His real name is: Doménikos Theotokópoulos, I highly doubt any Spaniard could pronounce that.  He is originally from the beautiful island of Crete.  He studied the traditional Byzantine art, and then traveled to Venice to become a master in Post-Byzantine art.  However, El Greco couldn’t find enough work in Italy, so he moved to Toledo in hopes of the King commissioning him to create works for the Cathedral.  Sadly, the Church and the monarchy didn’t enjoy his works, and didn’t get the job.  He continued to paint with small commissions from random upper class people (AKA the people who had money to pay for such services).  Fun fact about El Greco:  He didn’t become famous until after his death, when people noticed his use of brighter colors in figures that he wanted to stand center (like Monet and Van Gogh).  It is also believed that he had terrible eye sight because all of his paintings have elongated figures and in some paintings there is zero depth perception.

His most famous piece of work is located in Toledo:  The Burial of the Count of Orgaz 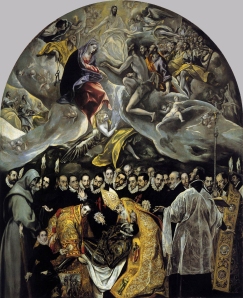 Where’s El Greco? Seriously…he is in this painting.

This painting was finished by his son after El Greco’s death.  Supposedly this painting shows what life was like during that time.  The wife is awaiting for the arrival of her husband, working on some sewing project.  While one of the maids is bringing the son in to say good night to the mother.  To the right of the wife is the head maid, which is shown by the type of head covering she has. 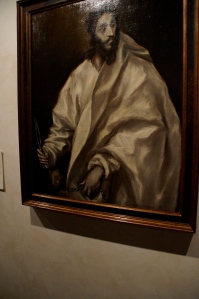 El Greco painted many religious paintings, as was common during his time. This set of paintings are the ones of Jesus and his Disciples. This one specifically scared me because of the way he portrayed a demon (that thing in the corner).

Some other sites we saw:

Toledo is literally a big hill. In the center of this picture is the Cathedral.

La Cathedral de Toledo. Sorry it cost 8 euros to go in…I ain’t got time for that. 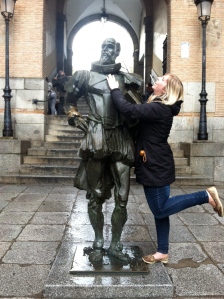 I had a little stroll with Cervantes, the writer of the book “Don Quioxte.” Toledo is located in the area of La Mancha, where Don fought the windmills that he taught were his enemies.

Tile work from Sevilla in Toledo! 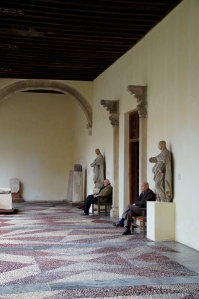 Although Madrid and Salamanca were beautiful and exciting cities, I truly enjoyed being in Toledo.  It is a gorgeous city with soooo much history.  Also, how can you not hate the city that made the swords for the Lord of the Rings movies (SERIOUSLY.  Toledo is known for its sword making)?  I can honestly said that Toledo has a place in my heart.

Where in the World is Amy?