This past weekend, I got to experience maybe the most Spanish thing I could ever do (next to flamenco dancing and playing classical flamenco music…that’s for another day), I got to head to the city of Cadiz for CARNIVAL.

Los Carnavales is one of the best-known carnivals in Spain. The whole city participates in the carnival for more than two weeks each year, and the presence of this fiesta is almost constant in the city because of the rehearsals, recitals, and contests held throughout the year.

When I headed back to Bollullos, my bilingual coordinator picked us up and took us on a tour of the city where we got to see different Carnival celebrations in different neighborhoods.  She mentioned that while they were “eating on the street” (which means eating at a restaurant…) there were men singing.  I didn’t understand until we drove by the main street of Bollullos and there was a group of older men, wearing matching outfits, singing to people at a bodega.  These groups are called chirigotas and are well-known witty and satiric groups that train for the whole year to sing about politics, topics in the news, and everyday circumstances, while all of the members wear identical costumes. Their songs are all original compositions and are full of satire and wit. Each chirigota, whether a professional group or one made up of family members, friends or colleagues, has a wide repertoire of songs. They sing in the streets and squares, at improvised venues like outdoor staircases or portals.

Most historians believe that the Carnival tradition grew out of the tradition of the Roman Saturnalias, which early on developed into Christian celebrations around Epiphany. Carnival marked the end of these celebrations, which exploded in orgies of “fat eating” before Lent; hence the roots of its name – Carni Vale – “Farwell to meat”. The Carnival at Cadiz is at least 600 years old; it is supposed to have been introduced to Cadiz after the reconquista by merchants and traders from Venezia, where the earliest documented Carnival took place in 1286. The Carnival at Cadiz has, however, had a special history as it has continuously been marred by a succession of bans, prompted by its satires and political impact. Thus it was banned from 1937 until 1975, when Franco died.

Here is the official website for the Cadiz Carnival: http://www.carnavaldecadiz.com (There are some great videos from this years Carnival!)

Finally, what you have all been waiting for…PICTURES:

Mexicans and the Mime 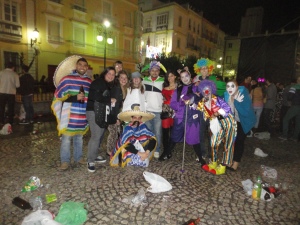 The whole group with some randos. 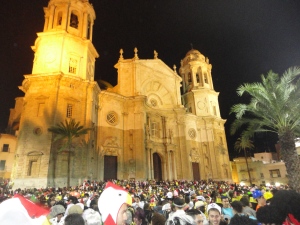 This is the crowd in front of the cathedral.

Some people are just too cool for costumes…LAME

Where in the World is Amy?